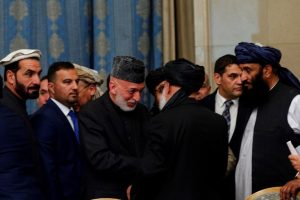 MOSCOW, RUSSIA - FEBRUARY 06: Head of Political Office of the Taliban Sher Mohammad Abbas Stanakzai (front L) and Former President of Afghanistan Hamid Karzai (front R) greet each other after the manifesto following the peace talks on Moscow format at the President Hotel in Moscow, Russia on February 6, 2019. The Taliban representatives met a number of non-government Afghan politicians in the Russian capital Moscow on for the landmark peace talks. Sefa Karacan / Anadolu Agency

The recent round of talks between the US government and Taliban leaders in Qatar has renewed hopes for peace in Afghanistan, a country plagued by nearly four decades of war.

However, peace talks with the militant group also raised concerns among Afghan citizens with regard to the political and social achievements of the last 18 years, made after the fall of the Taliban in 2001.

In talks held last week the US’ special envoy for peace, Zalmay Khalilzad and Taliban leaders reportedly agreed to an initial framework of the eventual peace negotiations — these meetings are being referred to as “talks of talks” within Afghan political circles.

While there are several unverified accounts in the Afghan and international media with regards to this framework, the withdrawal of US troops is certain to be among them. “We made progress on vital issues in our discussions and agreed to agreements in principle on a couple of very important issues,” Khalilzad told the media in Kabul on Monday. He arrived in the Afghan capital to inform President Ashraf Ghani of the new developments.

“There is a lot more work to be done before we can say we have succeeded in our efforts but I believe for the first time I can say that we have made significant progress,” Khalilzad said.